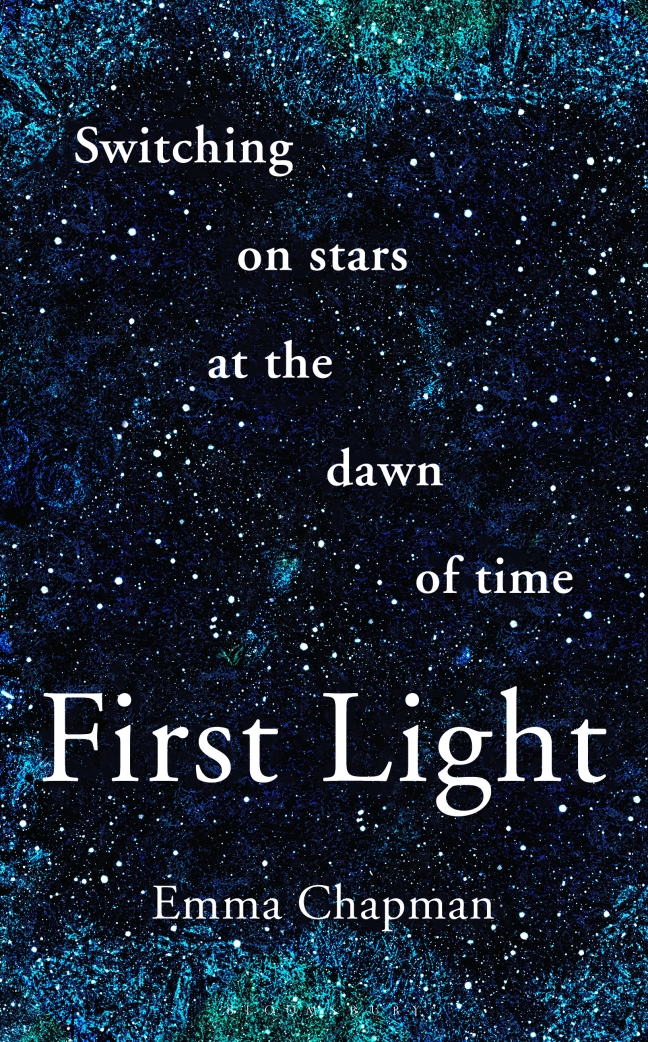 I am excited to announce that my book, entitled “First Light: Switching on Stars at the Dawn of Time”, will soon be published by Bloomsbury Sigma.

“Lyrical, profound, witty, and literally enlightening” – Adam Rutherford, author of How to Argue with a Racist, Presenter of BBC Radio 4 Inside Science

“First Light is a dispatch from the frontiers of science, from a brain fizzing with ideas and energy.” – Chris Lintott, presenter of BBC Sky at Night

“Just as the first stars illuminated the early Universe, Emma’s pen
illuminates our minds with an understanding of one of the most
fascinating epochs in the history of our cosmos.” – Professor of Cosmology, Durham University

“The prose flows smoothly, never seeming to drag… What really makes the book sing, though, are the witty interjections and personal anecdotes… First Light is a fantastic debut on the popular science scene.” ― Nature Astronomy

“Throughout First Light, Chapman’s authenticity and humour shine through… In short, this is a charming book that was as fun to read as it was informative, making it as ideal for the casual reader as for those with an existing understanding of the field.” ― Physics World

Chapman employs a conversational tone and sprinkles in stories and wry observations that will keep readers entertained … Readers will happily follow along as Chapman covers centuries of speculation, unexplained anomalies, informed conjectures, and current reasoned suppositions. Her enthusiasm is contagious, and should strike just the right notes with audiences who enjoy pondering the mysteries of the universe. ― Booklist

Astronomers have successfully observed a great deal of the Universe’s history, from recording the afterglow of the Big Bang to imaging thousands of galaxies, and even to visualising an actual black hole. There’s a lot for astronomers to be smug about. But when it comes to understanding how the Universe began and grew up we are literally in the dark ages. In effect, we are missing the first one billion years from the timeline of the Universe.

This brief but far-reaching period in the Universe’s history, known to astrophysicists as the ‘Epoch of Reionisation’, represents the start of the cosmos as we experience it today. The time when the very first stars burst into life, when darkness gave way to light. After hundreds of millions of years of dark, uneventful expansion, one by the one these stars suddenly came into being. This was the point at which the chaos of the Big Bang first began to yield to the order of galaxies, black holes and stars, kick-starting the pathway to planets, to comets, to moons, and to life itself.

Incorporating the very latest research into this branch of astrophysics, this book sheds light on this time of darkness, telling the story of these first stars, hundreds of times the size of the Sun and a million times brighter, lonely giants that lived fast and died young in powerful explosions that seeded the Universe with the heavy elements that we are made of. Emma Chapman tells us how these stars formed, why they were so unusual, and what they can teach us about the Universe today. She also offers a first-hand look at the immense telescopes about to come on line to peer into the past, searching for the echoes and footprints of these stars, to take this period in the Universe’s history from the realm of theoretical physics towards the wonder of observational astronomy.

Emma Chapman is a Royal Society research fellow and fellow of the Royal Astronomical Society, based at Imperial College London. She is among the world’s leading researchers in search of the first stars to exist in our Universe, 13 billion years ago, and she is involved in both the Low Frequency Array (LOFAR) in the Netherlands and the forthcoming Square Kilometre Array (SKA) in Australia, a telescope that will eventually consist of a million antennas pointing skywards in the desert.

Emma has been the recipient of multiple commendations and prizes, the most recent of which was both the 2018 Royal Society Dorothy Hodgkin Research Fellowship and STFC Ernest Rutherford Fellowship, two of the most prestigious science fellowships in the UK. She won the Institute of Physics Jocelyn Bell Burnell Prize in 2014, and was runner-up for the UK L’Oreal Women in Science award in 2017. In 2018 she was also the recipient of the Royal Society Athena Medal.

Emma is a respected public commentator on astrophysical matters, contributing to the Guardian, appearing on BBC radio and regularly speaking at public events. Among others, she has spoken at Cheltenham Science Festival, the European Open Science Forum and at New Scientist Live.